Cecina River between Nature and Legend

A few km from Il Vecchio Mulino and Villa Fiorenzani you can take a half day or a full day excursion.

Looking around it would seem that these valleys have not changed much since the time of the Kaiknas, a powerful Etruscan family originating from nearby Velathri (today’s Volterra) who ruled over these lands and who bequeathed the name to the Cecina river. The hinterland of the Val di Cecina is one of the wildest and most intact areas of Tuscany: there are no shelters and there are few marked paths, the inhabited centers are small and isolated, nature has been the absolute master for almost two centuries, demonstrating considerable wealth of animals and plants.
This route is short and easy, suitable for everyone.
The forest is covered by a Mediterranean scrub of holm oak, strawberry tree, juniper, mastic, myrtle, field maple and majestic oaks; here live wild boars, roe deer, mouflons, porcupines, badgers, and even wolves, nocturnal and diurnal birds of prey.
But the undisputed protagonist of this excursion will be the Cecina river, with its natural pools and its fascinating legends. 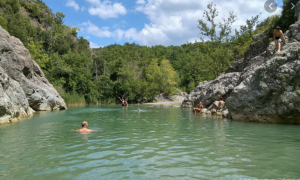 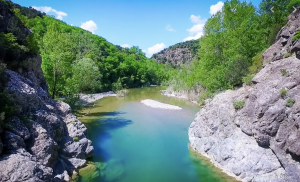 Stories and legends of the Masso delle Fanciulle

There is a story that gives its name to the Boulder of the Maidens, a somewhat sad story that tells of a violent past. Once upon a time there were two very beautiful and very sweet cousins; the two were also very friendly and often spent their time near a large boulder near the river. From here they looked after their sheep and their songs were added to those of the other shepherds singing joyful love songs. The animals of the forest flocked enchantedly to the great boulder and even the birds stopped to listen to the harmonious voices that echoed in the valley. Unfortunately, an old werewolf who had fallen in love with the two girls also stopped every day. One day, no longer content with hearing them and looking at them in secret, he jumped on the two girls and tried to bite them. Frightened to death, the two cousins ​​tried to escape him, climbing to the top of the great rock, but in one leap the wolf reached them. Then the girls, unable to escape, took each other by the hand and threw themselves into the waters of the river. The river Cecina, pitying, transformed the two girls into waves of water; so carried by the current they fled from the greed of the hungry monster, moving away forever.
Other stories are much closer to us: in the long years of the Second World War this stretch of river witnessed the actions of the resistance against the Nazi-Fascist troops; some of the bloodiest clashes in these areas took place right near the Masso; The Masso was in fact a strategic lookout point on which the partisans took turns guarding, so the Germans regularly tried to take control of this position. 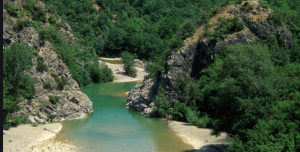